Thirty-Five Beautiful Ladies make the list to one of the most coveted pageants in the country, the Miss World Philippines 2017.

The ladies revealed their statuesque figures as they donned their swimsuits and evening gowns, and also gave a glimpse of their interesting personalities during the profile interviews.


In no particular order, some of these beauty queen hopefuls include an international pageant runner-up, a sportscaster, a daughter of an actor and a commercial model, a forensic practitioner from the U.S., two half-Germans, a professional singer with a recording contract, a national titleholder, provincial level titleholders, a sister of a Miss World Philippines (decade: 90s), and an orphan who turned into competitions to gain experience and friends.

Miss World Philippines National Director Arnold Vegafria is optimistic about the quality and diversity of this year's bumper crop of aspirants.

He says, "It's remarkable how today's young Filipina beauties are obviously more confident, principled, outspoken, but more importantly, driven with a bigger and nobler purpose.

“Now that we've leveled the playing field, we can only wish them luck in their quest for the title and make pageant history once more."


For his part, Miss World Philippines General Manager Bessie Besana is ecstatic about the unprecedented turnout.

"This is definitely a record-breaking feat!" he exclaims. "Based on the numbers alone, we've never seen this kind of enthusiasm and interest during the past years. With these ladies, we are confident that we can keep up the country's winning streak in the global pageant arena."


A Charity Gala Night will be held on Aug. 31, 2017. The beneficiary will be the Jose Reyes Memorial Medical Center, with particular focus on the care and rehabilitation of its indigent pediatric ward.
A special part of the Charity Gala Night will include six very talented contestants, who were chosen by five seasoned judges, namely Benj Gabitan of ALV Talent Circuit, Actor Teejay Marquez, MWP2012 Queenie Rehman, MWP2015 Hillarie Parungao and MWP2016 Catriona Gray. The Talented Six will be showcasing their individual skills and will vie for the award of "Miss Talent".

Here are the names and details of the 35 candidates:
(Click on their names below to see their individual Facebook pages.)

The Miss World Philippines 2017 pageant will be held on September 3, 2017 at the Mall of Asia Arena. 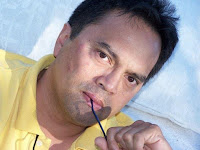 Monch "Monchster" Henares is a blogger, a tech and motoring specialist, an inventor, a specialized mechanic. He managed the motorpool for a limousine company in Las Vegas, Nevada, USA. He is now based in Manila, Philippines.

Posted by Monch Henares at 2:08 PM