Kingling Motors Philippines Inc. Is Chosen As Exclusive Distributor of Qingling Isuzu Trucks in the Country


The 'One Belt One Road' initiative in China and the 'Build, Build, Build' program here in the Philippines has given rise in the local demand for heavy equipment including commercial light, medium, and heavy trucks. With that in mind, Qingling Motors Co, Ltd. (QMCL), the oldest and largest truck manufacturer, and maker of Isuzu parts and trucks in China will be exporting to the country several Isuzu truck models including special-purpose trucks and a mid-sized pick-up truck.

During the Philippine-China (Chongqing) Trade and Investment Forum organized by the Chongqing Municipal Commission of Commerce and the Philippine Chamber of Commerce and Industry held at the Conrad Hotel in Pasay City on September 16, 2019, Kingling Motors Philippines Inc. signed an agreement with Qingling Motors Co., Ltd. (庆铃汽车有限公司) of China to distribute and market Qingling Isuzu light, medium and heavy commercial vehicles in the country.

A fleet of Qingling Isuzu trucks was displayed at the parking area adjacent to Buffet 101 across the boulevard from the Conrad Hotel as a “soft launch” of the venture.

Leading the ribbon-cutting ceremonies were officials of Qingling Motors Co., Ltd., Kingling Motors Philippines Inc., and the Vice-Chairman of the China Council For The Promotion of International Trade (CCPIT).

On May 13, 1985, QMCL was jointly established by Chongqing Automobile Manufacturing Plant of China and Isuzu Motors Co., Ltd. of Japan (IMCL) as the first Sino-Japanese automotive business enterprise and commercial vehicle manufacturer. Isuzu Japan represented a sizable stake in the joint venture while the State represented the major shareholder. Around 2.5Billion RMB was invested to put up the manufacturing facility, which created jobs for more than 3,000 employees.

On November 25, 1992, Qingling and Isuzu became the first assembler in the Chinese national light-duty commercial vehicle industry to achieve an annual production of 10,000 vehicles.

On August 17, 1994, with the approval of the Chinese Government, Qingling Motors Co., Ltd. issued 500 million shares of stocks and became the first Chinese automotive enterprise to be publicly traded in the Hong Kong Stock Exchange (Stock Code HK1122).

In October 1994, Qingling and Isuzu jointly launched the N-series commercial vehicle, the 100P light-duty truck. At the same time, Qingling and Isuzu inaugurated the engine assembly plant and started the localization of the Isuzu 4JB1 diesel engine.

In 1996, Qingling started exporting engine and transmission components to the Isuzu engine assembly plant in Japan, which is distributed to Isuzu affiliates around the globe.

In 2000, Qingling and Isuzu started the production of the F-Series heavy-duty commercial vehicles and the next-generation N-series light-duty trucks with the new Isuzu 4K diesel engine in 2004.

In May 2007, the Qingling Isuzu (Chongqing) Engine Co., Ltd. was established with an investment of around 84 Million US Dollars. Qingling and Isuzu both hold a 50% stake in the joint venture that manufactures, assembles, and distributes Isuzu diesel engines.

In September 2011, Qingling and Isuzu signed a memorandum of cooperation to signify their joint entry into the rapidly expanding heavy-duty commercial vehicle market in China.

Also, in July 2012, Isuzu invested a 51% share while Qingling invested a 49% stake to establish the Isuzu Qingling (Chongqing) Autoparts Co., Ltd. With a total investment of 240 Million US Dollars, the joint venture was created to produce and market vehicle and engine parts and components.

In 2014, the factory manufacturing heavy-duty engine parts and components was in full swing and the mass production of the Isuzu 6U heavy-duty diesel engine started.

Today, Qingling Motors (Group) Co., Ltd. is one of the leading automobile manufacturers in China. It has 43 subsidiaries, several factories, and a research and development (R & D) center. The partnership between Qingling and Isuzu has expanded greatly to include technology, manufacturing, management, marketing, capital control and processes that help grow and enhance the core competitiveness of the joint enterprise.

Mrs. Sy established KMPI to locally market Qingling Isuzu light, medium and heavy commercial vehicles to complement the passenger and light commercial vehicle sales of Isuzu Philippines Corporation (IPC) and to further promote the Isuzu brand, which is very popular in the country.

"Kingling Motors respects Isuzu Philippines as our partner and we'll keep the company alive.... Our purpose is to import middle-priced high-quality trucks into the Philippine market to compete with other China brands here and not to compete with IPC here. We want to make our market coverage more wider, that's why we come here", stated Wu You Sheng - Minister Global Marketing Management of Qingling Motors.

KMPI aims to capture the growing commercial vehicle market dominated by other Chinese truck brands because of the huge price difference compared with the established Japanese brands.


“We realized that most Filipinos do not know how to pronounce Qingling, so we used the syllabicated version ‘King-Ling’, which is how it is actually pronounced. In Fukien, ‘Ling’ means dragon while in the Mandarin language, ‘Ling’ means light truck. So,  ‘Kingling’ means ‘King of the Dragons’ in Fookien and ‘King of the Light Trucks’ in Mandarin, which is truly our goal”, stated the lady EVP and COO.

“With world-class quality, Isuzu brand recognition, competitive pricing, and an innovative dealer network including a ‘One Price’ policy for all the Qingling Isuzu dealers in Luzon, Visayas, and Mindanao, we are confident that we can capture a significant chunk of the growing truck market in the Philippines”, added Mrs. Sy.

KMPI will also be expanding their line with special-purpose trucks like flatbed trucks, car-carriers, fire trucks, man-lifts,  boom trucks, sewage trunks, tankers, and street sweepers. If they don't have it on stock, a buyer can order the unit and delivery will be in 60 days.

KMPI will be selling two Isuzu light-truck models, the LEGA and the MEGA, which are exclusive only for the Qingling Isuzu Brand.

Warranty will be for 100k km or 3 years whichever comes first. 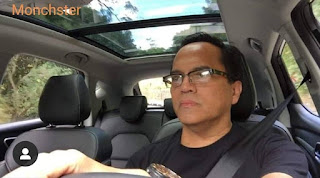 Monch "Monchster" Henares is an award-winning automotive journalist and feature writer for the Philippine Daily Inquirer's Road Talk, a media blogger @ MonchsterChronicles.com, and a co-anchor in the program 'Kaya Mo Yan' on DZRH News Television.  He is also a tech and motoring specialist, inventor, and automotive engineer.

You may e-mail him at monchnrs@gmail.com

Posted by Monch Henares at 1:55 AM