I've Been GROWL'd: Upgrading to an Android Head Unit Can Bring an Old Car Back to Life | Monchster Chronicles

Text and Photos by Monch Henares

Do you have an old car you can't part with? It could be the very first car you owned with each of its thousand parts having a memorable story behind it. It could also be a car given by a special someone thus making it very sentimental. Or it could just be a car that runs and looks like it just got out of the showroom because you've maintained it meticulously with tender loving care throughout the years.

Whatever the reason is, why replace your keeper-of-a-car for the newest model that boasts of having the latest in infotainment and convenience features when you can simply upgrade its outdated stereo?

When I decided to upgrade the sound system of my 13-year-old Honda City iDSI, I had two choices to ponder on. The two most common head unit sizes are the double-DIN and single-DIN units. Single-DIN stereo openings measure 2 × 8 inches while double-DIN openings are 4 × 8 inches. If you're replacing a double-DIN unit, you'll have more options to add smart features to your stereo. A single-DIN doesn't automatically mean you won't be able to pair your Android phone to your car for Android Auto, but you will have fewer choices.

The stereo originally installed in my Honda City was a Jurassic thirteen-year-old JVC am/FM radio with a CD player unit. I had a choice whether to just upgrade to another single-DIN unit capable of connecting to my phone and music player or going all-out and getting a double-DIN state-of-the-art large-screen Android head unit.

Was it a mind-boggling decision to make? Nah! It actually took me a few seconds to decide that it would be a large-screen Android head unit. Maybe because it would have every convenience feature known to modern man, which meant wireless connections, voice command, and a large touchscreen. It would be like having a huge tablet on my dash. The coolest thing ever.

The majority of the head units I shopped around for were made in China. This really didn't weigh much in swinging my decision, 80% of all electronic stuff is made there anyway?

Now comes the tedious task ahead. With a dozen brands and styles to choose from, I now had to dig deep into specs, features, and a ton of online reviews. Which one would give me total satisfaction, awesome entertainment, and peace of mind while I drive?

I came across several ads and recommendations from friends, but one brand impressed me more than the rest because it had almost everything on my criteria list. With the Filipino's pulse and taste in mind, this brand is totally developed, designed, and assembled here in the Philippines. I am a staunch advocate for the “Buy Local” and “Support Local Industry” movements.

I proudly chose the GROWL Elite Android 9-inch Head Unit from Growl Audio Philippines. A double-DIN head unit with the following specs on the brochure:

I contacted Growl Audio Philippines through their Facebook page and inquired about the price and availability of their top-of-the-line, crème de la crème, and flagship head unit, the Elite Android.  I was lucky to chat with Arbues Tolentino, Growl's Business Development Head. He gave me a brief rundown of what the Growl Elite Android model was capable of doing and its compatibility with my car.

More impressive than its specs was its price tag of Php37k. I told Arbues that I fell off my seat after reading his price quote, but actually, I was pulling his leg so he could offer me a better deal.  The prices of the other brands with similar specs, that I got quotes from, were in the same range or even higher.

Arbues quickly mentioned, “Sir, we have a PROMO now going on where you can get the Elite unit for two thousand pesos less. Now Php35,000.00 only”. Though I wanted a bigger discount, I was happy with the offer, who wouldn't be?

I agreed, and we did a virtual handshake and scheduled my 2-hour installation for a Monday morning at Centris Walk, Eton Centris in Quezon City. That was the only Growl store open and available.

I got to the Growl Centris store before 10AM and finally meet Arbues face-to-face.  He introduces me to Michael Dacanay, Growl's Sales Development Associate, who unboxes the Growl Elite Android 9-inch Head Unit for me, and we go over the unit's physical features and connections.

He connects the unit to a test rig at the store, and he shows me the speed and features of its Android interphase.  This is not done for every customer. I specifically asked for a detailed demo to feed my OCD quirks. Since two technicians were available that morning, I was in for a faster install.

Tech Mike worked on installing the head unit inside the car. The installation was done with utmost precision. Tech Mike knew how to remove the center consul and trims without breaking valuable wire terminals and connector clips. It seemed he did this 100 times before. He didn't even splice my OEM wiring, he just plugged it in using a Honda wire-harness compatible wire-connector terminal block. That's what I call plug-and-play.

Tech Edmar on the other hand worked on installing the reverse camera in the trunk lid. The reverse camera is integrated into the license plate light housing. It looks more OEM than those stand-alone cube-shaped types you would see protruding like a sore thumb on cheap installs. The color temp of the LED cluster it came with didn't match the one I had on the right side. Oh well, my old one can always be replaced. Edmar's install was neat and thorough. I couldn't see a wayward wire in sight.

The meticulously clean installation took a little more than 1-hour to finish. Michael Dacanay then did a run-through with me on the operation of the unit. Now I know why the box didn't include an operator's manual. I didn't need one. It was like simply operating an Android cellphone. There is a user's guide built into the interphase for less-techie owners.

My audiophile ears couldn't be happier. The new Growl Elite Android Head Unit brought my old outdated OEM speakers to life. The Android Auto feature also made it safer and less distracting for me to answer a phone call or search for my favorite playlist. The Big 9-inch screen definitely adds to the car's technology and interior pizzazz.

Congratulations to Team Growl for the excellent buying and installation experience. I've been Growled! 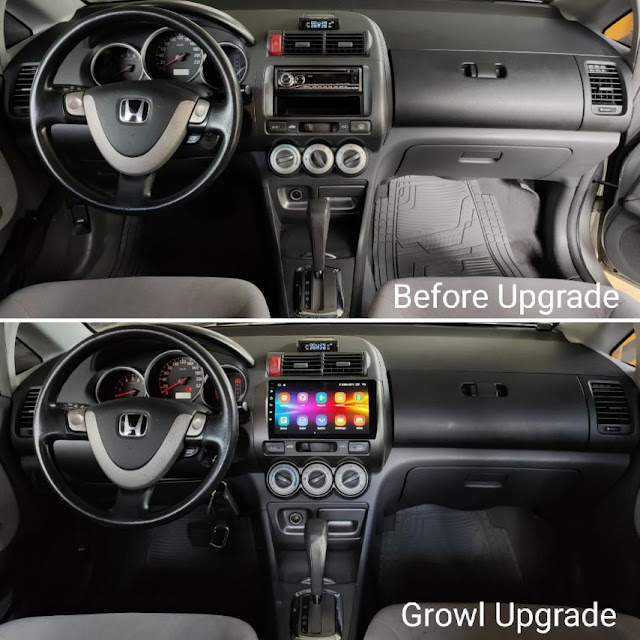 The Good and the Bad

PROS (after 1-month of daily use)

I would love to go all-out on the sound quality by upgrading the OEM speakers with premium top-of-the-line speakers and adding an under-seat subwoofer, that's if I come up with the hefty budget for it. But, as for now, I am 100% satisfied with what I hear.

I would also install a digital TV box if the need for viewing local television arises and probably a 4G sim card.

Monch "Monchster" Henares is an award-winning automotive journalist.  He is the founder of MonchsterChronicles.com, which ranks No. 6 in the TOP TEN Car Blogs and News Sites in the Philippines.
He is also a tech and motoring specialist, inventor, and automotive engineer. He managed the motor pool for the largest limousine company in Las Vegas, Nevada, USA. He is now based in the Philippines, and together with his partner, Arabelle Jimenez, they co-founded motourismo.ph. Monch is currently the President of BuildMeUp Corp, a digital media company.
You may e-mail him at monchnrs@gmail.com
Follow on Facebook
Instagram @themonchster
Youtube Channel Monchster Chronicles
Get FREE Monchster Chronicles stories in your email.

Email ThisBlogThis!Share to TwitterShare to FacebookShare to Pinterest
Labels: Growl, growl audio, growl elite, made in the philippines, Motoring, TECH