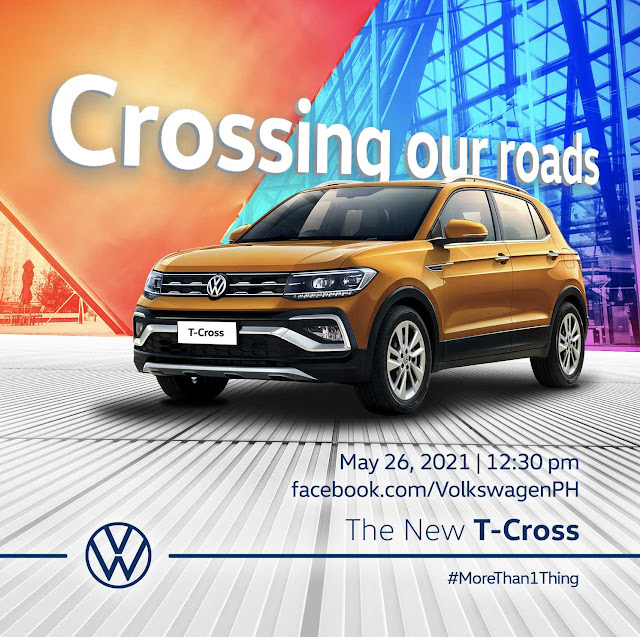 Have you ever crossed paths with an SUV that ignited (or rekindled) that fire within you? Come May 26, 2021, that spark may well begin when Volkswagen Philippines officially makes available to the public its global SUV, the T-Cross.

To celebrate its local market introduction, Volkswagen Philippines initiates the #TCrossTrendspotting activity, wherein the public is enjoined to send as many photos of their random T-Cross sightings on the road, at the dealer's, or in any location, to the social media pages of Volkswagen Philippines with a brief caption explaining their impressions of the vehicle, along with the hashtag #TCrossTrendspotting and #MoreThan1Thing. Five winners will be chosen to receive an entertainment gadget.

This #TCrossTrendspotting activity, which runs from May 26 to June 30, 2021, not only showcases the beauty and trendiness of the T-Cross, but also provides an excited motoring public with various glimpses of the crossover in different surroundings and conditions. The photos, combined with the enticing introductory price offers and outright P30,000 cash discount upon reservation during the promo period, make it so much easier for them to decide that the T-Cross is, indeed, that one missing piece in their own lifestyles. 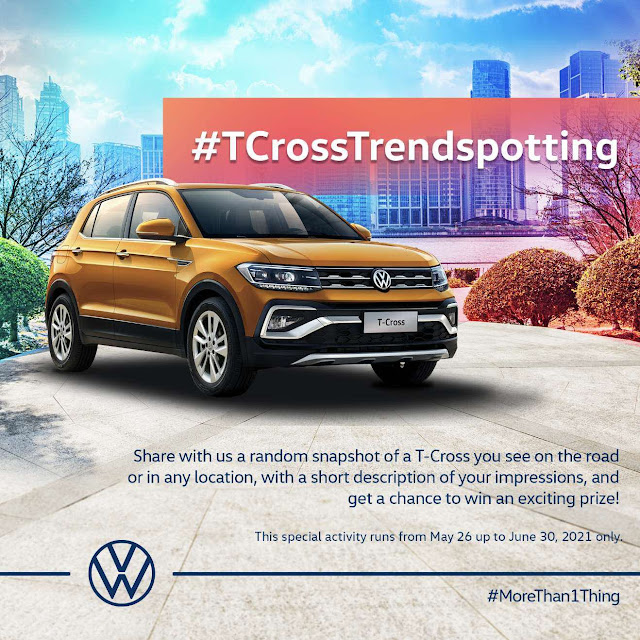 From all angles, the T-Cross is a picture-perfect subject, with its trendy design and youthful interior layout (Yes, even from the top with the SE variant’s panoramic sunroof). And with the longest wheelbase in its class (5-seater subcompact crossover), the T-Cross offers that spacious, versatile 5-seater cabin that can provide up to 1,319 liters of cargo space. The T-Cross provides above-industry-standard protection by virtue of the vehicle’s strong body structure, electronic stabilization program (ESP), cruise control, tire pressure monitoring system, rear park distance control (PDC),  LED headlights, 6 airbags, rear camera, and autonomous emergency braking (AEB) for the SE variant.

At its heart is the Euro6 emission standard 1.5-liter engine with 6-speed Tiptronic AT in both variants (180 MPI AT S and the 180 MPI AT SE) for optimal fuel efficiency and satisfying power in both city and countryside drives.

The T-Cross’ design and engineering echoes the diversity of its target market—upwardly mobile, results-oriented, and overachieving multi-faceted millennials who expect their cars to keep in pace with their wide-ranging passions and personalities—which begins with the design statement aptly summed up to “I am more than one thing.”

Every T-Cross unit that rolls out of any of Volkswagen’s four global manufacturing and assembly hubs in China, Brazil, Germany, and India is consistent with the exact design and engineering specifications and standards of Volkswagen Germany. It’s as if the T-Cross that will park in every Filipino garage comes straight from Volkswagen’s global headquarters in Wolfsburg.

The T-Cross has lived up to its global stature, having been introduced in 2018, and by 2020 had been offered in 55 countries, selling over 300,000 units in just the course of two years.

The T-Cross isn’t just a hit with the market. Across the globe, the T-Cross has been reaping accolades from automotive journalists and other award-giving bodies. It has also earned 5 stars in the European New Car Assessment Program (NCAP), the Australasian NCAP, and Latin NCAP safety rating.

For that stress-free ownership experience, Volkswagen Philippines’ aftersales will make sure that the T-Cross is for keeps. With its once-a-year periodic maintenance service (PMS) or 10,000 km (whichever comes first), the T-Cross is on average up to 40% more affordable than the industry standard, versus most of its competitors in the segment in the duration of 5 years of ownership. This would be on top of the warranty coverage of 3 years, or 100,000 km (whichever comes first); spare parts warranty of 2 years, and; service quality consistent with Volkswagen standards across the world.

So, whatever you’re busy with, take time to spot a T-Cross that crosses your way. Who knows, your next passionate pursuit might be for this one.

The T-Cross will be available in Volkswagen dealerships in Luzon starting May 26, and in Visayas and Mindanao beginning June 4, 2021. Due to overwhelming public demand, Volkswagen Philippines extends the introductory price offer of P30,000 off the standard retail prices until June 30, 2021.

Posted by Monch Henares at 3:22 PM