The Volkswagen Multivan Kombi is here, ready to move you to your next success stories | Monchster Chronicles

The iconic Volkswagen Multivan Kombi—which has long been a staple of fond motoring memories by our folks back in the day—makes a momentous comeback in the Philippines this July.

Volkswagen Philippines is bringing in the exclusive top-of-the-line Multivan Kombi which is laden with modern features and automotive technologies that will further define the user’s motoring lifestyle, particularly those who are always on the go to attend important business meetings, both online and face-to-face.

Powered by a 2.0-liter TDI diesel engine mated to a 7-speed Direct Shift Gearbox (DSG) with Tiptronic function and coasting feature, it boasts a maximum power generation of 150 ps and a top torque of 340 Nm. This power and efficiency of the interplay between the engine and transmission ensure adequate power with minimum fuel consumption, even when the Multivan Kombi is loaded to capacity. The DSG and cruise control also assure less shift fatigue for drivers even during long road trips.

The Multivan Kombi also has convenience and safety features that will be much appreciated by its owner. The Multivan Kombi offers dual power side doors for ease of entry and exit, while its power tailgate allows you to open and close the rear hatch doors conveniently, so you can do more important tasks at hand.

Inside, the luxurious Nappa leather interior is complemented with ultra-comfortable captain seats in the front and second row, the latter of which can swivel for that instant face-to-face meeting, while the 3rd row can still comfortably seat three people and allow their seats to recline and slide. Speaking of meetings on the go, a multifunction folding table is available and can be positioned in between the second and third rows, so important group decisions are made even before arriving at the destination.

The Multivan Kombi isn’t just a van. It has become a conveyance of success and prestige, enabling its owner to share his or her success with peers. The Multivan Kombi’s luxurious yet understated design perfectly reflects its owner’s status in life: Accomplished; at the peak of his or her career, but with loftier goals attained. With the Multivan Kombi, it’s never lonely at the top. And whether you find yourself in the comforts of the Multivan Kombi or in the company of friends and family at the end of the day—it’s still the company you keep that defines and determines your continuing success. People are, after all, still what makes Volkswagen a Volkswagen. 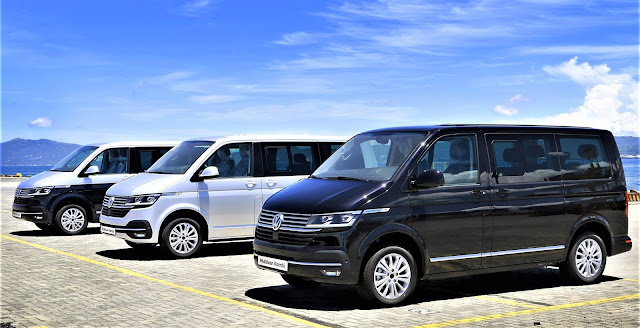 Volkswagen Philippines has also announced that a limited supply of the Multivan Kombi has already arrived locally and will be available in three colors: Reflex Silver, Black Pearlescent, and the Bi-Color Reflex Silver/Starlight Blue for an indicative price range of P3,650,000. Other color variants of the Multivan Kombi will also be available by special order. For more details on this, contact Volkswagen BGC at (02) 8558-5888; Volkswagen Quezon Avenue at (02) 8558-5818; and Volkswagen Cebu at (032) 517-8226. Private viewing can also be arranged at Volkswagen BGC.

Monch "Monchster" Henares is an award-winning automotive journalist.  He is the founder of MonchsterChronicles.com, which ranks No. 7 in the TOP TEN Car Blogs of the Philippines.
He is also a tech specialist, inventor, and automotive engineer. He managed the motor pool for the largest limousine company in Las Vegas, Nevada, USA. He is now based in the Philippines, and together with his partner, Arabelle Jimenez, they co-founded motourismo.ph. Monch is currently the President of BuildMeUp Corp, a digital media company.
You may e-mail him at monchnrs@gmail.com
Follow on Facebook
Instagram @themonchster
Youtube Channel Monchster Chronicles
Posted by Monch Henares at 3:00 PM