Text and Photos by Monch Henares

In the early months of the Covid-19 outbreak, we all were told that the original Alpha variant was spreading through fine droplets sprayed into the air by the mouths and noses of Covid positive individuals. These airborne droplets would settle on objects and surfaces we would normally come in contact with. Thus the published protocol was for us to wash our hands all the time, use alcohol or disinfectant on them, wear face masks, wear face shields, apply the 2-meter social distancing rule, or just stay at home and away from crowds.

In April of 2020, we were given two (his and hers) Personal Air Purifiers (PAP) by the 0917 Lifestyle online store for my partner Arabelle Jimenez and me to test-wear and review.  We wore them at home and especially when we had to venture out into the Covid-19 warzone.

We realized, according to what I've read, that it is effective within a 2-meter bubble of air space around the wearer, but it turns out, it was not effective on the misty (Alpha variant) droplet type. For that reason, I stopped using the hip pendant after a few months of wearing it, but Arabelle still wears hers at home. She admits that she has fewer encounters with her allergy to dust and pollen.

The Delta variant has created fear anew and is described as 50% more transmissible than the original Alpha variant because it is now aerosol or airborne. We started wearing our personal ionizers once again. We won't leave our home without it now.

How an ionizer cleans the air

An ionizer (also sometimes known as Ionisers) is a negative ion generator. These negative ions released attach to positively charged particles in the air, such as dust, bacteria, pollen, smoke, pet dander, and other allergens. The positively charged particles and negative ions bond together to create dense dirt particles that cannot float in the air. Your air feels fresh because the contaminants are no longer floating around in mid-air, but the fact is those contaminants are now firmly stuck to many of the surfaces such as the floor, walls, furniture, carpets, and tabletops. Heavier dirt particles fall to the ground and wait to be swept up or washed at a later time.

Laboratory studies have found particles of the Delta variant can linger in the air in aerosolized form for up to 16 hours.

After months of growing scientific evidence, the World Health Organization formally acknowledged the airborne spread of Covid in April. It can occur when viral particles remain “suspended in the air or travel farther than one meter”.

Since the Delta variant is a microscopic particle that weighs almost close to nothing and is capable of lingering in the air for hours, I decided to look for something that I could use to replicate its characteristics in air.  The choice was between cigarette smoke or fog from a disco smoke machine. Because it was easier to acquire, I chose cigarette smoke. Cough! Cough!

Luckily I had an old clear-glass mason jar with a tight rubber seal that I use as a cookie jar. Because I don't smoke (and never did), I had to bum a cigarette from my neighbor Vicky Lapena.

I switched on the power of the pocket-size 0917 ionizer and placed it inside the mason jar, lit the cigarette, and blew nasty smelling smoke into the jar till it was all white inside.

I started the timer. In a matter of 30 seconds, I noticed a swirl-type movement within the smoke inside the jar. After 2 minutes, I noticed the smoke starting to thin out. In about 7 minutes, the inside of the jar was completely empty of visible smoke.  Now that's what I call a neat magic trick.

Visible tobacco smoke is mostly carbon (soot), tar, oils, and ash. Tar contains most of the cancer-causing and other harmful chemicals found in tobacco smoke.

After my short experiment, I found a small amount of liquid on the bottom of the jar and an oily film on the walls. It could be condensation from the warm smoke, but when I cleaned the jar with a table napkin, the residue on the napkin had a yellow color and it reeked of cigarette smoke. Could it be the tar and oils from the smoke? Can you imagine that filthy residue lining the insides of your lungs? Seeing it changed my whole perspective on smoke in general. 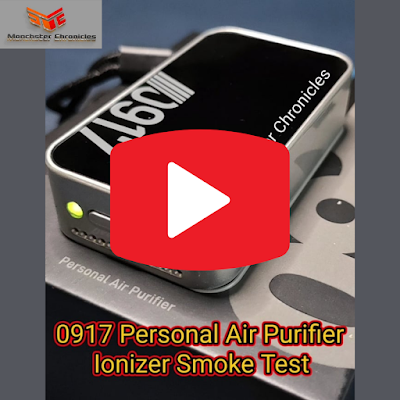 I had to duplicate the experiment but this time without the ionizer inside the jar. Guess what? The smoke after 10 minutes never cleared. This was to prove that smoke can linger in the air for a long time, just like the Delta variant particle would. On a larger scale, it looks like smog lingering for days over the metro.

To truly test its effectivity range, I was looking to find a large 2-meter diameter balloon or sphere to fill up with smoke, but these materials are not on hand at the moment.

After months of wearing and testing, I can say that the 0917 Personal Air Purifier (Ionizer) can be an effective gadget in cleaning the air around the wearer.  I can't say it is 100% effective in keeping the Delta variant at bay because there are so many other factors beyond this experiment that could cause the virus to slip through one's tightly guarded defenses.

In short, for added safety, I would still recommend social distancing, proper hygiene, sanitize, and often washing one's hands. This fashionable Personal Air Purifier gadget can be worn together with other safety gear such as face masks, face shields, etc. It's not only cool and hip to wear, it actually works and could help save your life.

The 0917 Personal Air Purifier comes complete with a lanyard, a micro-USB charging cable, and a user's manual inside a black protective box.  It also comes in two colors, piano black and glossy white.

Monch "Monchster" Henares is an award-winning automotive journalist.  He is the founder of MonchsterChronicles.com, which ranks No. 7 in the TOP TEN Car Blogs of the Philippines.
He is also a tech specialist, inventor, and automotive engineer. He managed the motor pool for the largest limousine company in Las Vegas, Nevada, USA. He is now based in the Philippines, and together with his partner, Arabelle Jimenez, they co-founded motourismo.ph. Monch is currently the President of BuildMeUp Corp, a digital media company.
You may e-mail him at monchnrs@gmail.com
Follow on Facebook
Instagram @themonchster
Youtube Channel Monchster Chronicles
Posted by Monch Henares at 12:04 AM