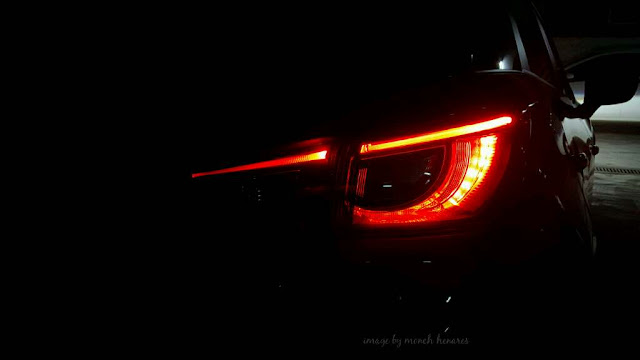 If any of you are familiar with the addicting video game "Angry  Birds", seeing the Soul Red colored 2017 Mazda CX-3 FWD Sport quickly reminded me of it. Those Rear LED Tail Lights (especially at night) captured my imagination and made me remember "RED", the lead character of Angry Birds, cute, angry, and very red.


The size of the 2017 Mazda CX-3 was smaller than I expected. It looked like a shortened version of its bigger brother, the CX-5, but it stood tall and proud with its sporty eighteen inch wheels. I was so eager to take it for a test flight. Let's see how this angry bird flies!

The interior wasn't really new to me because I've seen it before on the Mazda 2 Midnight Edition which I test-drove last November . I realized the 2017 Mazda CX-3 is a Mazda 2 hatchback on stilts. The interior is the same size as a Mazda 2, but with a lot more headroom.

This CX-3 model had a more elegant look to it. Blending in beautifully are the rich Red Leather Accent Panels on the doors and center console with the Carbon Fiber, Brushed Aluminum and Piano Black Trim. A flawless Red Stitching mends them all together. 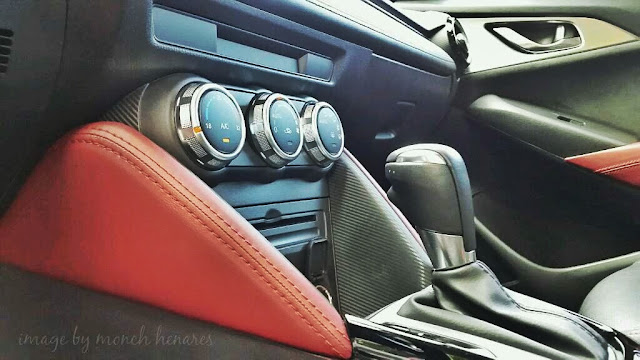 Its Front Bucket Seats stitched in leather with suede-inserts are snug, comfortable, and surprisingly cool to the body. The driver's seat had manual height adjustment. It was nice to note that both front seats have Side Airbags for added safety. 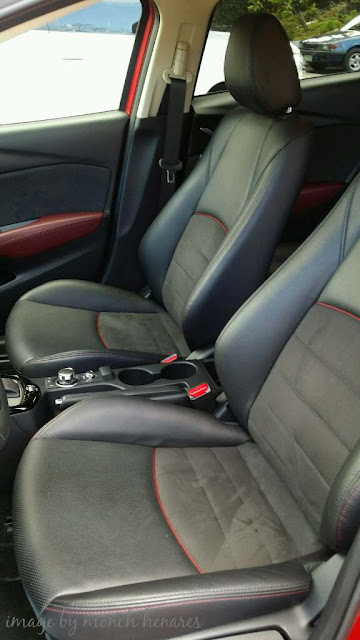 The  pair of Rear Folding Seats are much appreciated when you need the extra room to expand its very tiny luggage area. Thank God for that. All equipped with 3-Point Seatbelts and Individually Adjustable Headrests for each of the three passengers riding shotgun. 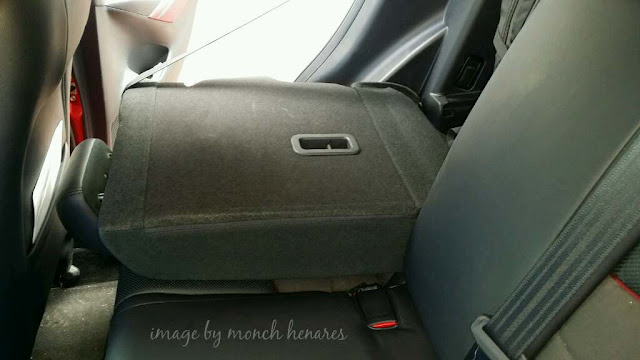 It's like the Mazda engineers were experts in the human anatomy, and had the driver's comfort as their main design thrust. They placed the pedals at a anatomically perfect position.  They added a Multi-function Tilt/Telescopic Steering Wheel, which can be adjusted to anybody's body built or driving position. They topped it off with a comfy sporty seat. Fatigue-free driving? A driver's dream indeed.

I love how the dashboard sits low and non-obstructive. A HUD (Heads-Up Display), located above the instrument panel, folds up when the engine is started, and it magically displays the vehicle speed. I just wished they would have made the reflected image larger. On the center sits the Seven-Inch Infotainment Touch-Screen, which displays and controls all Audio / Entertainment functions, Bluetooth Connectivity, NAV, Trip Computer, Rear View Parking Monitor, Info Details, and Settings.

The bright-metal trimmed instrument panel is simply elegant and easy to read or monitor, thanks to its bright and well placed markings. Seems like an  Analog-Digital mix of sorts, classy! 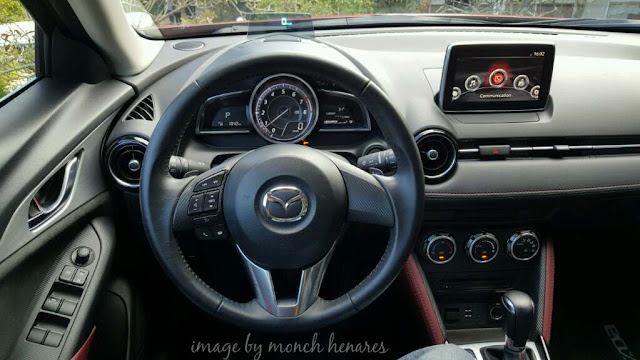 Push-Button Engine Start-and-Stop and Keyless-Entry with Alarm come standard with this model. Why did you not include a Smart-Keyless-Entry-System to the convenience roster, Mazda? Why?  By the way, with a Smart Keyless-Entry System, you just have to leave the keyfob inside your bag or pocket, go near the vehicle and pull on the door handle to unlock and open the door. That's convenient and safe. To lock the vehicle, all you have to do is walk away.

The center console shows off  three handsome aircraft-cockpit-type control knobs of the Fully Automatic Climate Control System at the top and right below it are a CD Slot with 2-power/USB ports, an AUX port, a 12 V power outlet, and an SD Card Slot for NAV data. Taking center stage is the ergonomically design Skyactiv 6-speed Transmission Selector lever with Manual Overide. Perched at the bottom is the Sport Mode Switch. 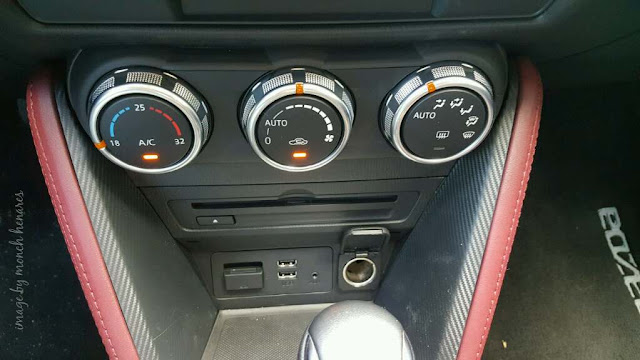 The handy and highly-functional Commander Control for the OM2D (Connect Smart Connectivity & Entertainment Audio System), which is a Mazda original, shares the space to the right of the emergency brake lever. 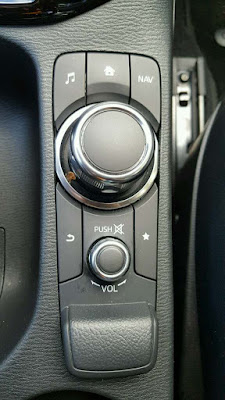 Four of my friends and I were off on a three-day music-jam-weekend at a beach house located at Matuod, Lian, Batangas. Our trip would take us on a 112 kilometer drive away from Manila, traversing through SLEX at highway speeds, before taking a short steady climb to Tagaytay, and down again towards Nasugbu. We were sure to hit some dirt-roads when we get to Matuod.

We started off from Paranaque. I was in a dilemma when I saw the amount of luggage five adult passengers needed to bring on a three-day-weekend outing. Three knapsacks, two duffel bags, two mermaid tails, a sack of swim gear, a bag of beddings, a bag of food, a small guitar amp, and two electric guitars. What the hell were we thinking? How did we stuff all that luggage and gear into that tiny cramped space? The master packers came to the rescue.

We actually did not leave anything behind. It all fitted nicely. I don't think we left any air-spaces between the bags. Our friend Joaco had to embrace his guitar all the way to the beach. Another friend Pete, a body builder, had to sit bending forward for the whole duration of the trip. His muscular body prevented him from leaning back fully. It was quite tight at the back. We were all excited to go, so the inconvenience did not stop us. Off we went to frolic in the clear blue waters of Batangas.


The 2017 Mazda CX-3 FWD Sport was packed to the brim, and laden with five beach hungry adults, their luggage, their beach gear, and their musical instruments. It's a good thing no one thought of bringing the stage. So I thought the angry bird would not fly. I was wrong. It did in fact muster so much power from its Skyactiv 2.0L 4 cylinder 148PS Gasoline Engine synchronized with a 6 spd Skyactiv Automatic Transmission. We cruised the highway with dominance and ease.

Accelerating hard with the Sport Mode on was totally exhilarating. The high revving roar of the engine together with its perfectly tuned Dual Exhaust Tailpipes was music to my ears. I could not rightfully test its 0-100 kph time in seconds due to the weight the car was carrying, but I did anyway. I set the transmission selector lever to manual and used the steering wheel Paddle Shifters to shift. It did it in 10.0 seconds with a fully loaded car and a tank full of gasoline. 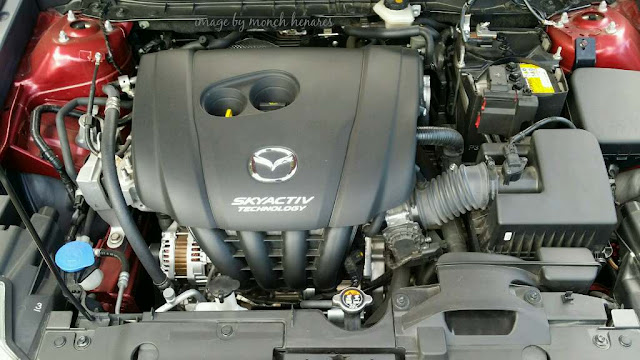 We climbed the wavy road to Tagaytay without a hiccup. The ride was relaxingly smooth and the suspension never bottomed out.

This 2017 Mazda CX-3 FWD Sport is equipped with the i-Stop (Idling Stop feature). The system came on when we encountered the stop-and-go traffic in Tagaytay. It shut the engine off when I stopped and started the engine again as soon as I released the brakes. A cool way to save gas.  It also started the engine when I lowered the climate control temperature setting while I was still at a stop. So, don't worry, the car's cabin temperature will always stay at its setting, even with the i-stop feature on. By the way, the system never faltered. I'm glad Mazda has now installed an i-Stop Deactivate Switch on their latest models. Now we have a choice to lessen the earth's carbon footprint or not. 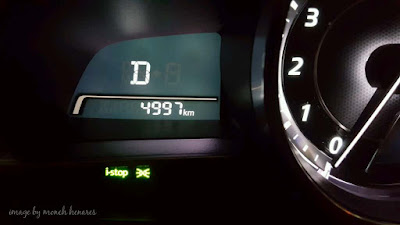 I was amazed how effective the Shark-fin Antenna's range was. It's mounted on the rear part of the roof.  My favorite station 105.1 FM was clearly playing my most requested tunes without interference and distortion through the hills of Tagaytay and up to the Sugar Mills near Nasugbu.... that is about 100 kilometers away. A little bit of trivia; How far away can a shark sense its prey? According to marine experts, the distance is a little bit over 240 meters. This Sharky leaves all other sharks in the dust. 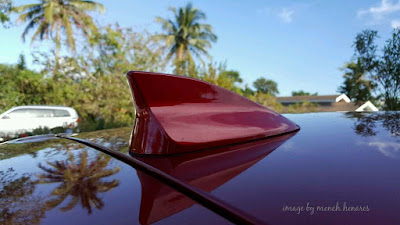 Once we reached the unpaved roads of Matuod, I had to put this bird through another test. How well can it handle rough terrain? Surprisingly, it maneuvered and hurdled with ease. Small ruts on the beaten path did not hinder my speed at all until I came accross this four-inch-high obstruction. I slowed down and glided over it very gently. I heard a faint thud, meaning it hit something underneath the car. The 2017 Mazda CX-3 FWD Sport's  ground clearance of 16 centimeters is kinda low for a crossover don't you think?

At last, three hours later, we arrived at the sandy beach of Matuod. We all stepped out to enjoy the view and fresh air. I see Pete (the muscle man who was bending forward) get off and walk like Quasimodo, the hunchback of Notre Dame. Joaco steps out still tightly embracing his guitar. Jeffrey enjoyed the trip in the back seat. He had everyone's pillows around him.


On another trip,  driving back to Manila from Anilao Batangas, we decided to take the scenic route home. We passed through the old heritage town of Taal. Of course we stopped for a photo-op at the centuries-old-church, St. Martin of Tours. Then we took the back winding roads beneath Tagaytay, down to the town of Laurel and up the scenic zig-zag road of Talisay. Body-roll was at a minimum on these tight bends.  I was cutting the curves with a samurai sword. After and hour of driving the CX-3, it became a part of me. Every movement I made was perfectly executed by this angry bird.

The 2017 Mazda CX-3 FWD Sport is also equipped with Dual Front and Side Airbags, 4-Wheel Disc Brakes with ABS, and a Sport Tuned Suspension.

With all the little design snags as in the tiny luggage space, not-so-roomy rear seat, and low ground clearance, the CX-3 angry bird still soars above the clouds. It's handsome, powerful, agile, and very lovable. It is packed with lots of safety and convenience features, too. Maybe it's not made for group of friends who love to frolic and travel to the great blue yonder. It's made for single men or women who love the outdoors, and who go out in search for adventure. They will grow to love this sub-compact crossover until they marry and have a kid or two. They better upgrade to the CX-5, CX-7, or maybe the 7-seater CX-9 if they plan to over-procreate.

This bird may look angry, but its a sweet and lovable ride that will surely grow on you. 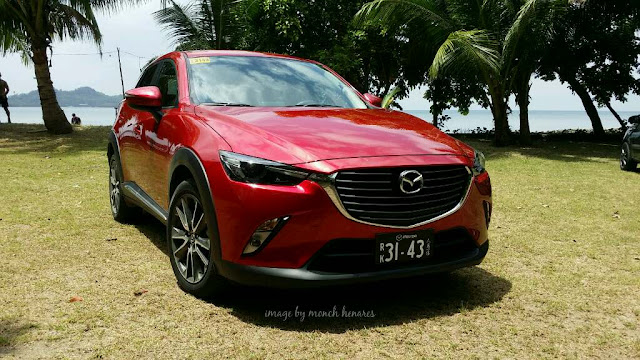 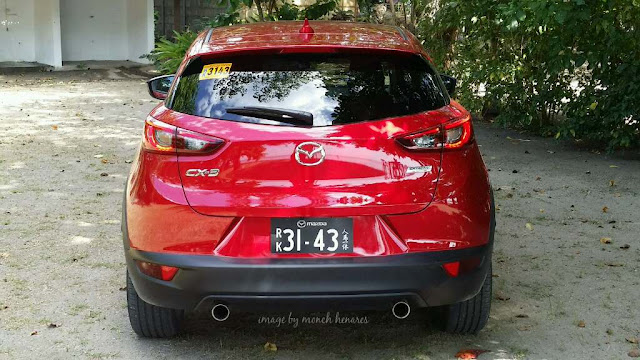 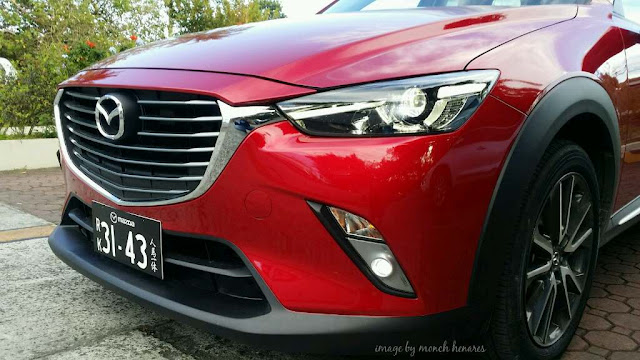 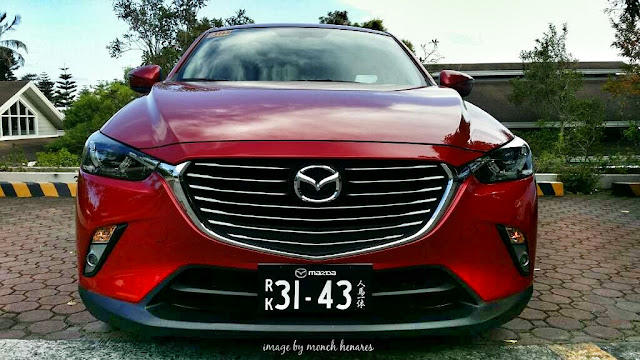 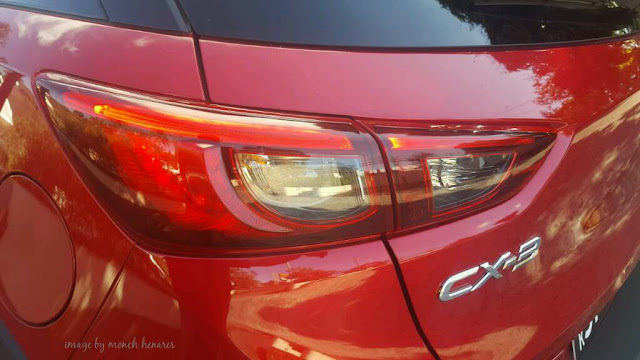 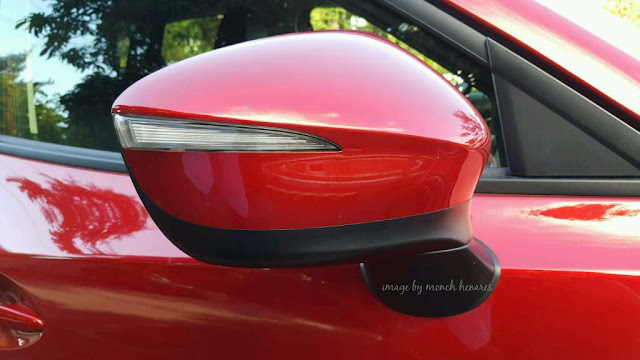 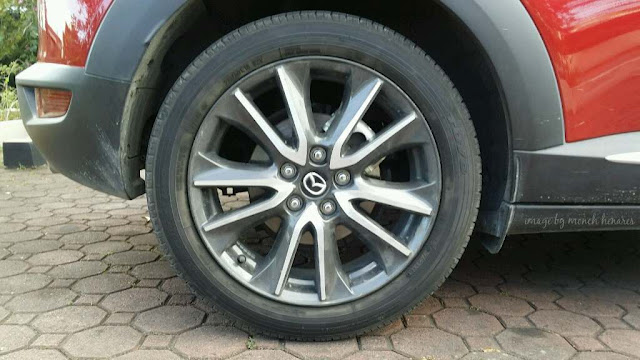 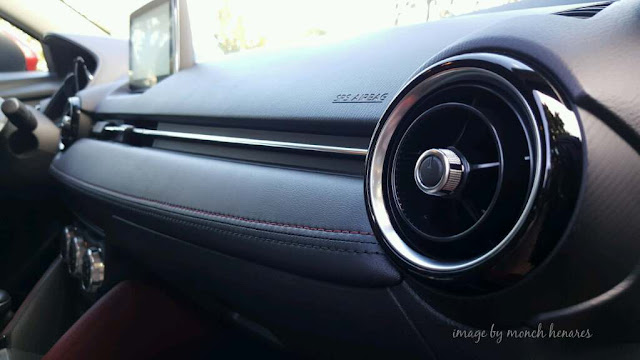 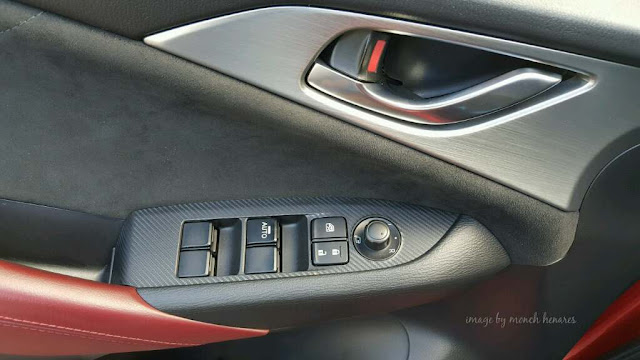 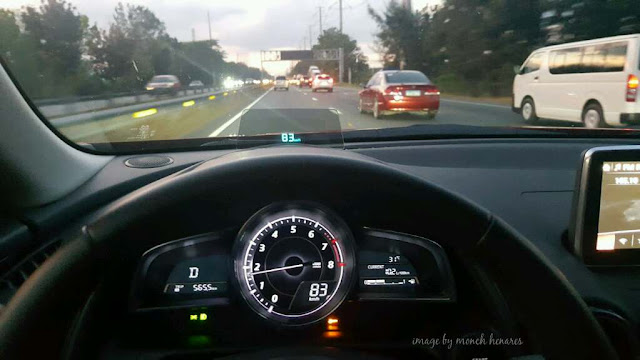 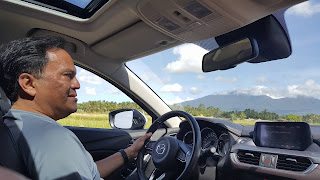 Monch "Monchster" Henares is a blogger, a tech and motoring specialist, an inventor, and a specialized mechanic. He managed the motorpool for a limousine company in Las Vegas, Nevada, USA. He is now based in Manila, Philippines.

Posted by Monch Henares at 3:30 AM