Sports: Feel The Rush with Petron at the Philippine Leg of the Formula 4 SEA Championship


Petron Corporation, home-grown makers of superior quality gasoline and engine oil,  presented to the media its hosting to the 2nd leg of the Formula 4 South East Asia (F4SEA) Championship which will be held at the Clark International Speedway (CIS) this weekend of Oct. 21 and 22, 2017.


This will be the second time (F4SEA) is using the CIS as a venue and now with Petron Blaze 100 Euro 6 and Petron Blaze Racing as its official Gasoline and Engine Oil. The 1st one was held last October, 2016.

According to F4 SEA Chairman and CEO Peter Thompson, "Formula 4 racing is the first step to develop enthusiasts for a professional motorsport career in the FIA pymarid, culminating in F1. Open to anyone 15 years old and above, F4 helps young drivers transition from karting to single-seat racing, and helps them learn the racecraft they need to move up in the world of Formula racing."

F4 SEA focuses on driver experience and development by ensuring a level playing field in a FIA single organization championship based on a one-make, one-data, one-cost concept. All drivers have access to race and engine data, learning from race engineers and coaches, so winning is based on racecraft and not performance aids.

With Petron blaze 100 Euro 6 as the official fuel, F4 SEA Operations Manager Mohd Sharli said, "On average, the Petron-supported cars perform more efficiently as opposed to other generic fuels. In the high-octane world of racing, every millisecond counts and that improvement helps each race driver refine their track record."

F4 SEA Technical Director Sean Thompson observed, "From our initial examination, we can see that the fully-synthetic Petron Blaze Racing Engine Oil had markedly reduced levels of carbonizations after many laps of testing. The oil was unaffected by the extreme temperatures experienced under racing conditions. There was no excessive wear and tear on vital components.  Critically, there was no loss in oil pressure." 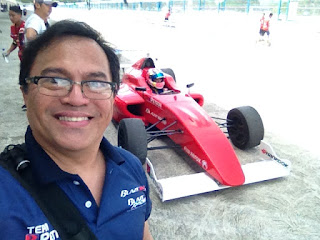