Last Friday, July 27, 2018, the largest global sports media property in Asian history, ONE Championship™ (ONE), electrified the packed Mall of Asia Arena with another evening of authentic world-class martial arts action. The state-of-the-art showground played host to ONE: REIGN OF KINGS, featuring the absolute best in local and international martial arts talent. In the main event, hometown hero Kevin “The Silencer” Belingon of Baguio City, Philippines overcame a stiff challenge from two-division ONE World Champion Martin “The Situ-Asian” Nguyen, winning by unanimous decision to claim the ONE Interim Bantamweight World Championship.

In the main event of ONE: REIGN OF KINGS, Filipino dynamo Kevin “The Silencer” Belingon derailed Martin Nguyen’s goal to become a three-division world champion by outclassing the ONE Featherweight and Lightweight World Champion with his striking superiority. With his hometown crowd cheering behind him, Belingon effortlessly picked Nguyen apart in the stand-up, jolting the two-division titleholder with stunning left hooks and perfectly-executed spinning back kicks. In the end, all three judges scored the bout in favor of Belingon to win by unanimous decision after an intense five-round affair, bringing home the ONE Interim Bantamweight World Championship.


Kevin Belingon, ONE Interim Bantamweight World Champion, stated: “I can’t explain this feeling, I’m the happiest athlete tonight. Thank you to all the people who came out to support me, and of course to ONE Championship, my team, my coaches and trainers, and my teammates. To Martin [Nguyen], it was an honor fighting you. You’re such a great athlete and champion. I trained very hard for this fight, just to get this belt. I’m proud to be a champion representing the Philippines. My friend Bibiano [Fernandes], I respect him as a champion, but we’re in the same weight class and I’m the top contender. So there is no escape in facing me. I hope you recover fast and we can make the fight this year.”


In the co-main event of the evening, former ONE Lightweight World Champion Shinya “Tobikan Judan” Aoki of Japan smoothly steered to a first-round stoppage victory over Thai martial arts superstar Shannon “OneShin” Wiratchai. It quickly became the beginning of the end for Wiratchai just minutes into the first round, as he was effortlessly taken down by Aoki. On the mat, Aoki barely gave Wiratchai room to breathe, raining down a torrent of punishing elbows that compelled the referee to step in and call a halt to the contest. The victory earned Aoki GoDaddy Knockout of the Night honors. 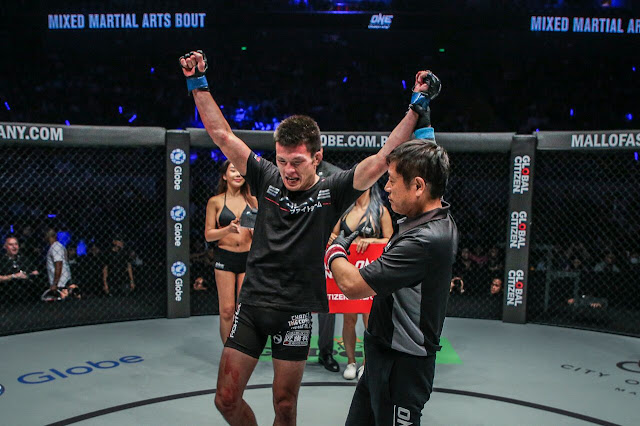 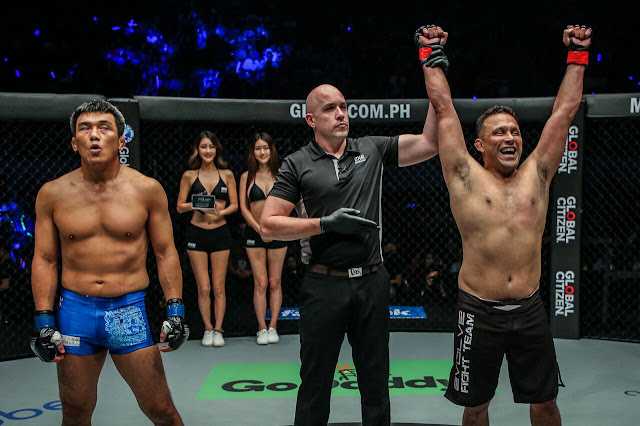 Brazilian legend Renzo Gracie made a triumphant return to mixed martial arts competition after eight long years, having his hand raised in victory at the expense of Japanese martial arts pioneer Yuki Kondo. Following a lengthy, most boring feeling-out process between the two grizzled veterans in the first round, Gracie shifted gears in the second frame and immediately drove his foe to the mat. Taking Kondo’s back, Gracie fastened a wrenching rear naked choke with no hesitation, which left his opponent no choice but to tap. 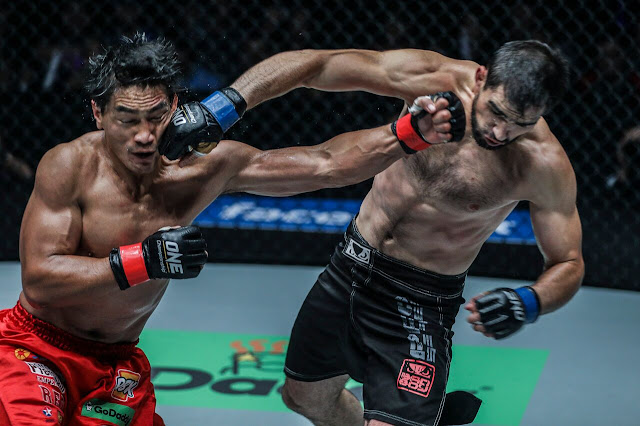 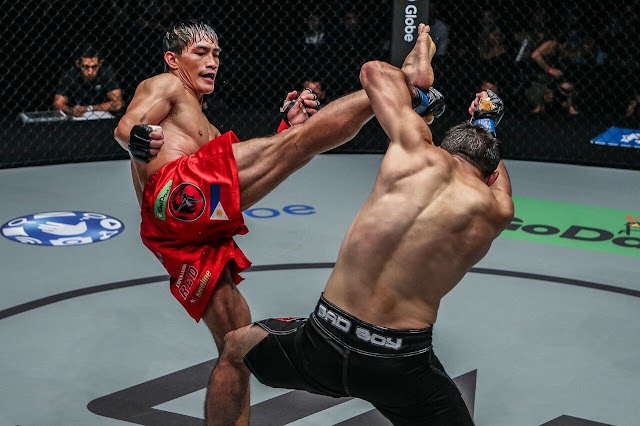 Hometown hero Eduard “Landslide” Folayang of Baguio City, Philippines turned in another complete performance, earning a unanimous decision win over previously unbeaten Aziz Pahrudinov of Russia. Folayang operated behind a relentless stream of leg kicks that left Pahrudinov hampered throughout the three-round contest. Connecting on his combinations with laser-like precision, Folayang dominated the bout as the three judges sitting cageside awarded him the victory. 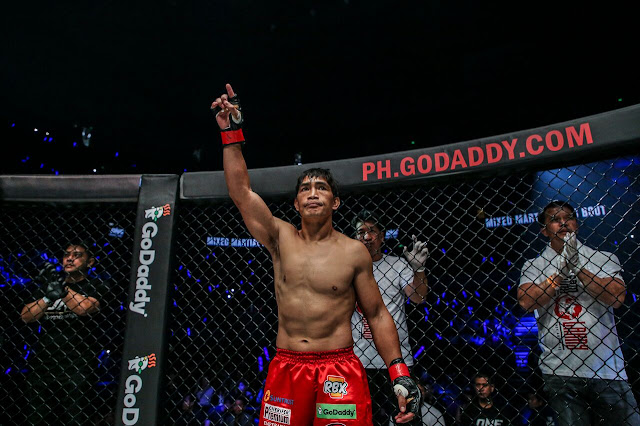 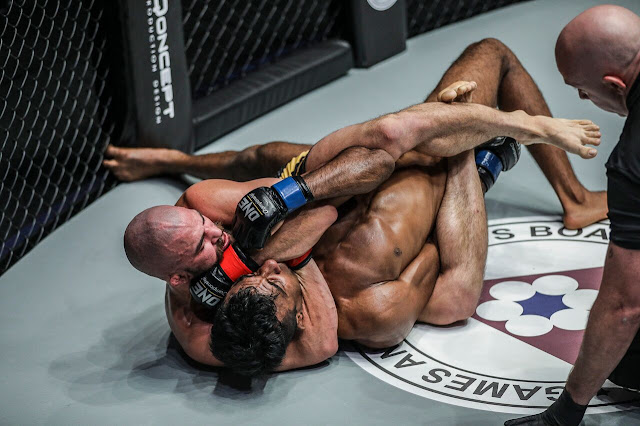 International grappling superstar Garry “The Lion Killer” Tonon of the United States was successful in his second appearance in the ONE Championship cage, defeating Rahul “The Kerala Krusher” Raju of India via submission in round three. After testing his striking abilities for the majority of the first two rounds, Tonon went back to his strengths in the third, taking the action to the canvas where he fastened a deep rear naked choke to seal the deal. 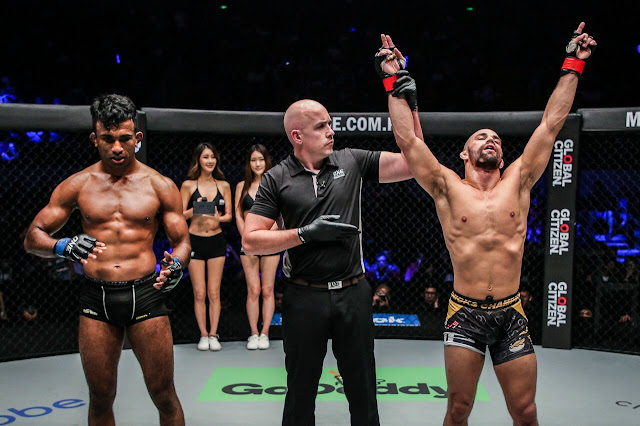 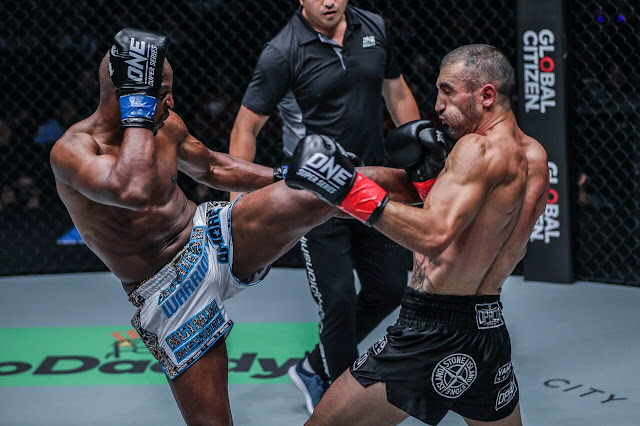 After falling short in his ONE Super Series debut two months ago, two-time Muay Thai World Champion Chris Ngimbi sought the redemption that he desired, edging out Armen Petrosyan via split decision in their three-round catch weight kickboxing showdown. Although Petrosyan kept himself aggressive all throughout the contest, Ngimbi landed the more telling blows from bell to bell, which was enough to persuade two of three cageside judges to score in his favor. 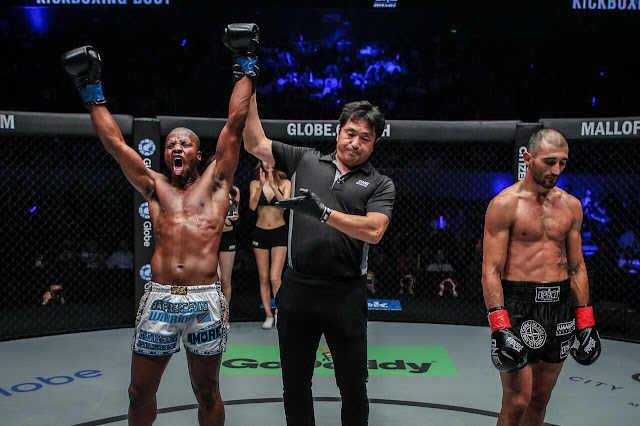 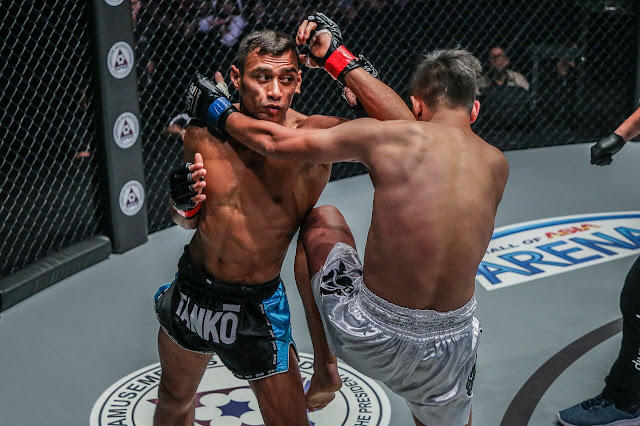 In a ONE Super Series Muay Thai contest, former ONE Warrior Series entrant Panicos Yusuf of Cyprus earned a unanimous decision victory over Han Zi Hao of China after a gruelling three-round affair. Operating behind a sound game plan and well-placed strikes, Yusuf countered Han consistently with a myriad of combinations off the back foot. In the end, all three judges scored the bout in favor of Yusuf. 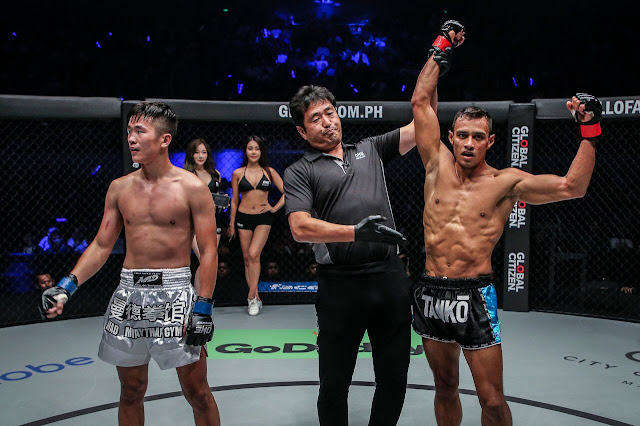 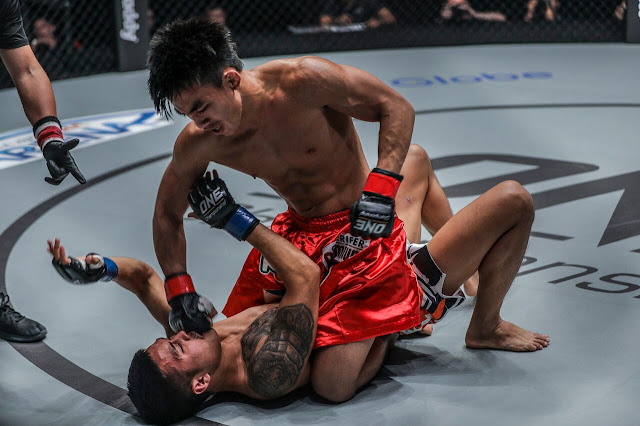 Former ONE World Title challenger Joshua “The Passion” Pacio of the Philippines notched his third-straight victory, authoring a spectacular submission victory over rising Thai superstar Pongsiri Mitsatit in the first round. After an emphatic slam to the canvas, Pacio finished the job with a straining armlock called the "Pacio Lock", leaving Mitsatit with no other choice but to tap. 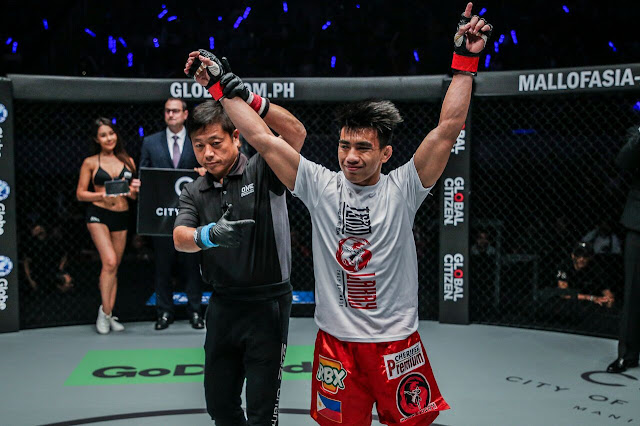 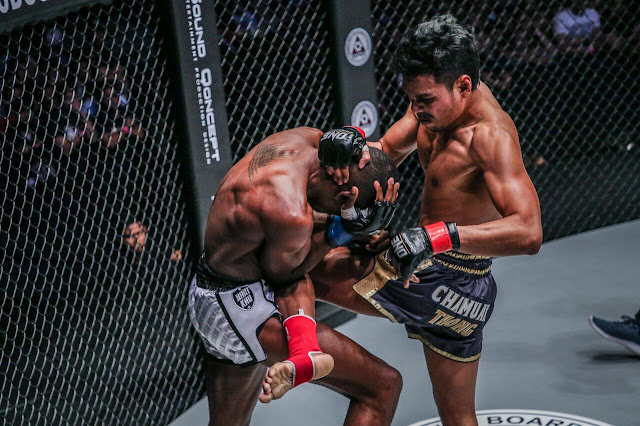 Former Lumpinee and Rajadamnern Stadium World Champion Chamuaktong Fightermuaythai of Thailand showcased his world-class striking skills, defeating challenger Brown Pinas of the Netherlands via unanimous decision. Making his ONE Super Series debut, Chamuaktong dazzled, putting his treacherous Muay Thai clinch game on full display, while connecting on a plethora of elbows and knees from close quarters. All three judges scored the bout in favor of Chamuaktong after three rounds. 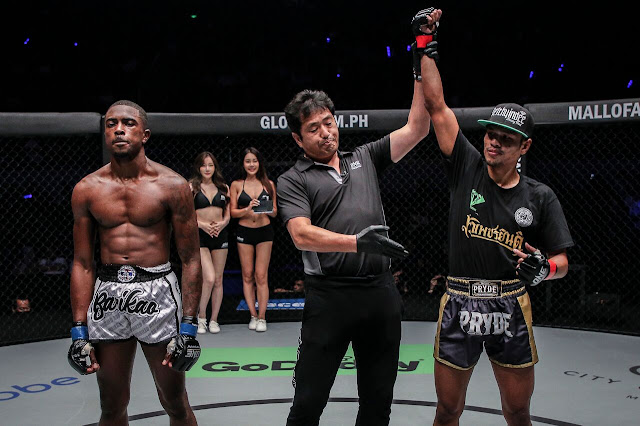 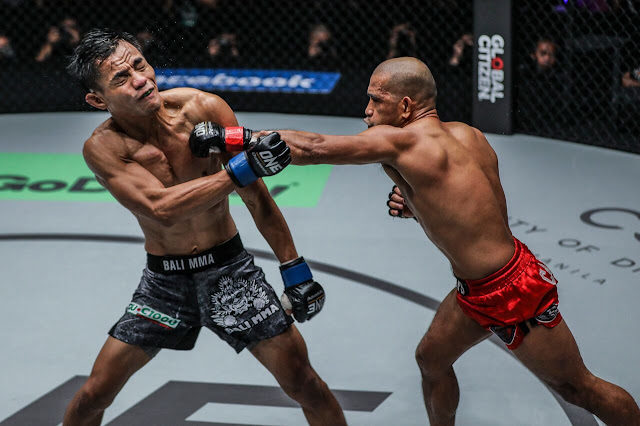 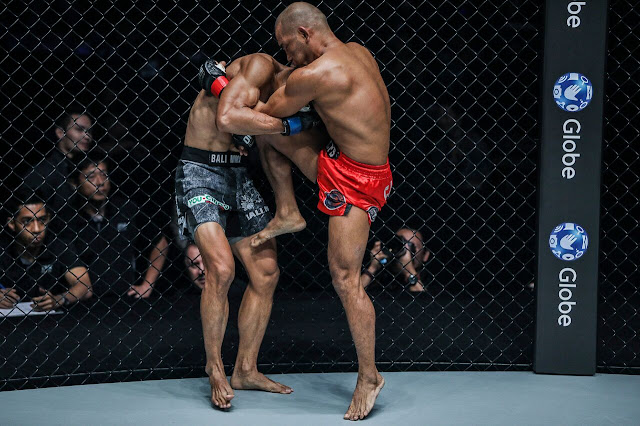 Filipino martial arts veteran Rene Catalan emerged as an early crowd favorite, bringing the Mall of Asia Arena crowd to their feet with a rousing performance. Over the course of three rounds, Catalan exhibited dynamic striking, feints, sweeping low leg kicks, and a powerful left hook that had highly-regarded opponent Stefer Rahardian of Indonesia in trouble on multiple occasions. In the end, all three judges scored the bout in favor of Catalan to win by unanimous decision. 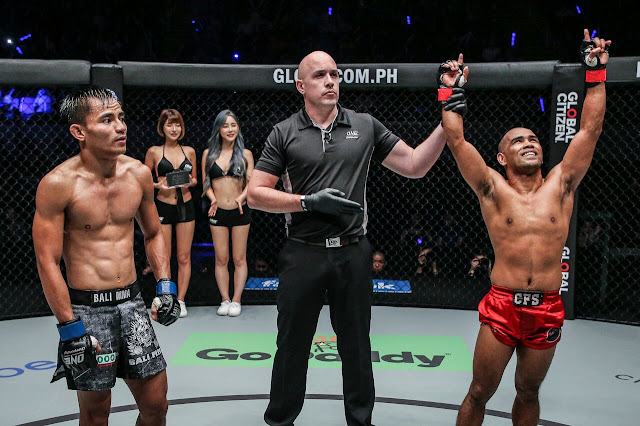 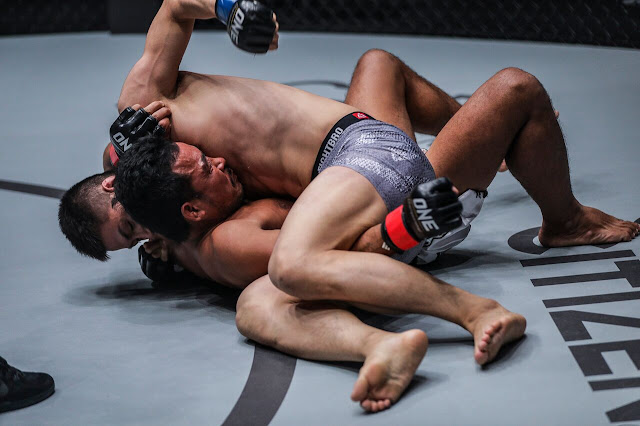 Kicking off ONE: REIGN OF KINGS was Chinese featherweight sensation “The Stalker” Xie Bin. After a brief grappling exchange on the mat, Xie made quick work of Cambodia’s Sor Sey, finishing with a deep guillotine choke that put his opponent to sleep early in the first round. 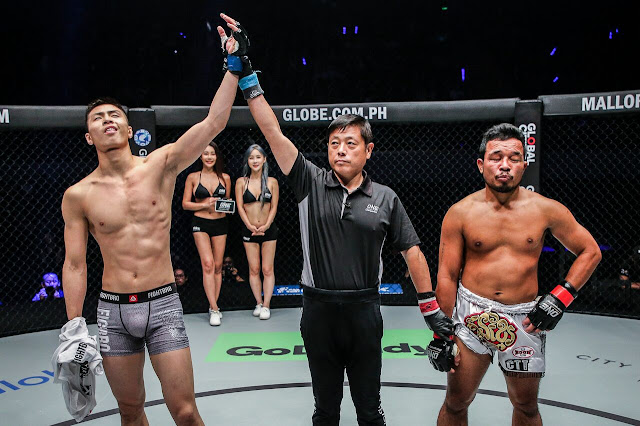 (Photos courtesy of One Championship)
Official results for ONE: REIGN OF KINGS

Monch "Monchster" Henares is a feature writer for the Philippine Daily Inquirer's "Road Talk", media blogger @ MonchsterChronicles, tech and motoring specialist, inventor, and automotive engineer. He managed the motorpool for a limousine company in Las Vegas, Nevada, USA. He is now based in Manila, Philippines and is the President of BuidMeUp Corp.
You may e-mail him at monchnrs@gmail.com
To follow him on Facebook
Instagram: @monchsterh