REACHING FOR THE CLOUDS IN AN EVEREST

As soon as I got word from Ford Philippines that they had scheduled a 2018 Ford Everest Titanium 4X4 3.2L Diesel for me to test drive and review, I quickly mapped out a route that would take me northward to Sagada in the Mountain Province. The perfect place with its demanding road conditions and rainy weather forecasted, to test the Everest's 4X4 capabilities and features.


Together with my partner and co-driver, Arabelle Jimenez, on this short-notice adventure was my good friend and school mate  Bambet Manipol, his wife Rita, and son Ramon in a 2016 Jeep Wrangler 4X4. We left for Baguio from Paranaque at about 8 am to meet up with the Manipols at Petron Marilao Pancake House for breakfast. While having my waffles with a ton of crispy bacon, Rita reveals some great news. She was able to book all of us for an overnight stay at a new boutique hotel in Baguio named Kamiseta. I got kinda excited to get there after reading excellent reviews of the Hotel.


It took us three short hours to get to Baguio City by way of the NLEX, TPLEX, and Kennon roads. We got to Kamiseta Hotel, which is stone throw from Wright Park, at about 1 pm. “WOOOW!”, is all we said as we walked into its intricately decorated, a little chaotic, French inspired lobby. It’s something I’ve never seen done before. It was fresh, relaxing, and very welcoming which its smiling hospitable staff showed as well.  For an old mansion converted to a hotel with only five themed rooms, it had modern conveniences, was clean, cozy, and had a five star feel.


The cold wet weather greeted us in the morning of day 2.  With heavy fog draping our view, we went on our way towards the magnificent Ambuklao Dam, our first stop on our way to Sagada.

With my fascination for lakes and dams, I insisted we take this out-of-the-way scenic route through the smooth and cemented Benguet – Nueva Viscaya Road just behind Mines View park.  It was not only going to be an adventure, but also a history lesson. This engineering marvel  took six years to be build and opened in 1956, thus making it one of the oldest and still functioning hydro-electric plant in the Philippines.

After our history walking-tour above the dam c/o Bambet (his grandfather Carino was the head engineer of the dam project) and merienda break by the lake, we had to decide if we would go back to Baguio and take the Baguio-Trinidad-Bontoc Road (Halsema Highway) or charter this Google unnamed road from the Ambulao Dam through Tublay, Benguet.  According to the online map, it meets up with the Halsema Highway right after traffic laden Trinidad. Guess which route we adventurers chose? Of course the unknown and unnamed one.


We were equipped with the 2018 Ford Everest 4X4 Titanium and the Jeep Wrangler 4X4, two very road or no-road worthy 4X4 vehicles, so deciding to take this semi-off-road route was a breeze. It was still raining and a bit foggy at times as we traversed through the wet, muddy, and very slippery 2-lane dirt road. It looked like this road had been cut a long time ago, and I was happy to see busy Department of Public Works and Highways (DPWH) construction teams cementing several portions of it. Maybe in a year or two, this whole stretch of eye-popping scenery will be open to the public.


It was the ultimate 2-hour off-road experience for me. The Ford Everest 4X4 rode and handled the worsening road conditions like a champ. Thanks to Ford’s Terrain Management System. We all had smiles as wide as the Nile. It was like going on a rigorous theme park ride without the vomit.


We finally arrived at the Halsema Junction, all muddy but unscathed and found a sign that read “Labey-Lacamen Provincial Road”. That unnamed road now has a name.  We turned right going north and found ourselves on one of the most dangerous highways in the world according to some.  Others claim it as one of the most deadly. I can tell you right now, it is not dangerous at all. You just have to drive with all your attention on the road because curves come up in an instant. You have to be alert at all times. Simply be a good driver, obey traffic rules and respect the right of way of others. I just wish all drivers plying that route would turn their lights on when it rains and especially when fog creeps in. By the way, it’s not the deadliest, yours truly is still alive.


We did not see much of the expected mountain view from the Halsema highway even with the panoramic roof of the Ford Everest opened due to the thick fog that never seemed to go away. Our altitude kept increasing as we drove towards Heaven. We sure reached it as soon as we got to Barangay Paoay, in Atok (the top), Benguet. We were at the highest point of the Philippine highway system at 2,255 meters (7,400 feet) above sea level. There was a marker by the road to prove it, but that is all we saw. The foggy weather spoiled it again.


There are a lot of view decks on the way, but it was useless for us to view some cloud formation because it was already all around us. We did stop-overs at the towns of Buguias in Benguet, Bauko in Mountain Province, and Sabangan in Mountain Province along the way, seeing glimpses of  some rice terraces and water falls which is common to the region. The majestic and picturesque Chico River gracefully flows alongside the whole stretch from Sabangan to Bontoc.


Exactly 7pm, after 11 hours of adventure driving and sightseeing, we finally arrived at our final destination, Sagada in Mountain Province.  We checked-in at the Sagada SunRise View Homestay which we booked a week in advance. So named after its strategic place where one can view a sea of clouds right from the hotel’s balcony at sunrise. It’s  the first hotel you will see as you approach the town proper on Staunton road.


To our surprise, Sagada SunRise View Homestay, was a hotel that felt like home. The food at the restaurant was great especially their breakfast silogs. Lloyd the resident manager and his crew of student interns were so attentive to our needs and requests, we felt so pampered.  There was ample parking for guests which is very hard to find in the town proper. We were fortunate though to find a parking spot in town when we went to have lunch at a diner, thanks to Ford's "Active Parking Assist". (watch video below)


Who would think one could find crafted beer in Sagada? We did on day two, when we stumbled across The Cellar Door. Located north of the town proper. They had one of the best crafted beer we’ve tasted and why is it only available 600 km away from Manila?  The place will open soon with several Igorot inspired villa-huts and will have campfires and live acoustic entertainment at its amphitheater that is one with nature. One thing they won’t run out of is crafted beer and the cool sweater weather.


Mostly all the local tours including the underground caves and hanging coffins were closed while we were there due to the relentless rain. Going and exploring on your own sometimes pays off. We heard of a small lake at the outskirts of Sagada and looked for it. The rarely driven on dirt road going to the lake was muddy with lots of loose slippery rocks, but we made it and arrive at  Lake Danum, a beautiful, but mystical place. It was like we were transported to the lake in a Harry Potter movie.  Another thank you to the Ford Everest’s 4x4 climbing skills and Hill Decent feature.


Though some people shy away from going to Sagada because it is far and hard to get to. I will insist that everyone see this enchanted place before you get old and grey. It is totally worth every peso and time. 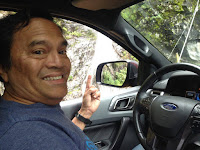 Monch "Monchster" Henares is a feature writer for the Philippine Daily Inquirer's "Road Talk", media blogger @ MonchsterChronicles, tech and motoring specialist, inventor, and automotive engineer. He managed the motorpool for a limousine company in Las Vegas, Nevada, USA. He is now based in Manila, Philippines and is the President of BuidMeUp Corp.
You may e-mail him at monchnrs@gmail.com
To follow him on Facebook
Instagram: @monchsterh
Youtube:  Monchster NRS
Posted by Monch Henares at 12:14 AM