Immerse Yourself In The Spider-Man Far from Home Movie With A Philips Monitor.

Spider-Man returns after a blockbuster release in 2017, picking off right after Avengers: Endgame. Despite the movie’s light-hearted tone, the film still packs quite a punch with exciting action scenes and awe-inspiring special effects. Yes, it's a superb movie to be experienced in the cinema,  but it's also great to watch at home on weekend movie nights with family and friend using a color-correct professional Philips monitor.

A Spider-Man cosplayer greeted the media as they arrived at the Director’s Club making the event even more enjoyable.  Mark and Mikee Malixi reppin for MonchsterChronicles.com and ArabelleJimenez.ph enjoyed the adrenaline-rushing awesome film after a hearty dinner and some web-slinging of our own.


Spider-Man by Insomniac Games, the hit PS4 title, was playable just outside the cinema. The suspenseful action on the breathtaking skyscrapers of New York City in the game were perfectly captured by the Philips Monitors BDM4350UC with its 4K Ultra HD LCD display. The BDM4350UC is perfect for the modern gamer and is even useful for both work and play. 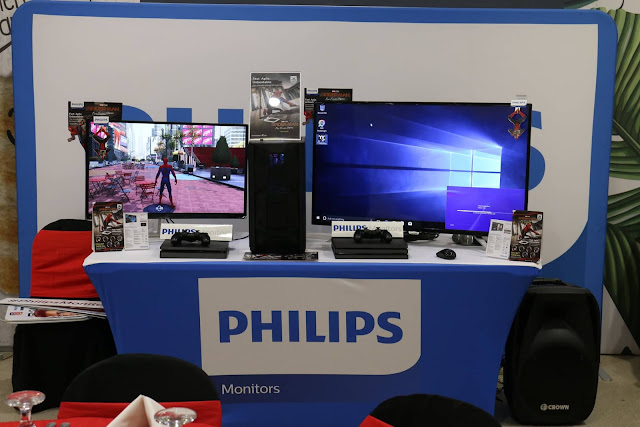 In partnership with Sony Pictures Entertainment, Philips Monitors will also be giving premium items to those who will purchase its displays. From July 1 – 31, every purchase of a participating product in chosen outlets and dealers will come with a limited edition Spider-Man: Far From Home collectible.

Customers can claim their goodies up to 60 days after the end of the promotion. For more information, please see this Facebook note.

About Spider-Man: Far From Home


Tom Holland reprises his role as The Amazing Spider-Man in the Marvel Cinematic Universe’s most recent film. Directed by Jon Watts and written by Chris McKenna and Erik Sommers, and starring Samuel L. Jackson, Zendaya, Cobie Smulders, Jon Favreau, JB Smoove, Jacob Batalon, Martin Starr, with Marisa Tomei and Jake Gyllenhaal, the movie follows Peter Parker as he goes on a school trip with his friends on Europe. Unfortunately, superheroes can’t go on vacations, and trouble follows Peter throughout the continent. As elemental threats from another dimension appeared to sow chaos, Spider-Man gets recruited by both Nick Fury and Mysterio for a rollercoaster ride of a field trip.

Get the best in curved monitors with Philips monitors 278E9QHSB Curved LCD Monitor. Sporting a full HD display for its whole 27” screen, the 278E9QHSB offers a very immersive experience for both gaming and watching movies. An ultra wide color range gives the most accurate representation of colors in display monitors. Its LowBlue Mode and FlickerFree features protects your eyes from strain, allowing for a healthier entertainment lifestyle. The 278E9HSB’s cousin, the 248E9HSB, offers the same features and functionalities but with a more compact, 24” display.
Customers who’d buy a Philips Monitors 278E9QHSB within the promo period would also take home a Spider-Man: Far From Home Travel Neck Pillow.

Monch "Monchster" Henares is an award-winning automotive journalist, and feature writer for the Philippine Daily Inquirer's "Road Talk". He is also a media blogger @ MonchsterChronicles.com, tech and motoring specialist, inventor, and automotive engineer. He managed the motorpool for a limousine company in Las Vegas, Nevada, USA. He is now based in Manila, Philippines, and is the President of BuildMeUp Corp.